Menu
Limited spaces are available in the Nursery Cygnet Class. Children can start at 2 years & 9 months old and we accept 2 year funding, ask at the school office or nursery for an information pack.
C
C

English- The Pebble in My Pocket

In Year 3, we have been looking at the text 'The Pebble in My Pocket: A History of Our Earth' by Meredith Hooper.  The children have asked I wonder questions, used fronted adverbials, acted out the journey of the pebble and looked at the features of a non chronological report. The children learnt the text about 'Earthquakes,' and are now writing their own volcano non chronological reports.

The children have been exploring the operation division. Using counters, the class solved division number sentences and explained their learning. We looked at the vocabulary linked to division and made the link that division is the inverse of multiplication.

Chase said 'Division is the inverse of multiplication.'

Phoebe said 'Division is not commutative but multiplication is.'

As part of our topic 'Urban Pioneers', the Year 3 children went on a trip around Weymouth town to discover more about the history of Weymouth. We were accompanied by Steve Wallis, Senior Archaeologist in the Historic Environment Team, Dorset Council.

Steve met the children at school and delivered an initial talk to the children including a discussion about the places we visited. We walked along the seafront to the pavilion and onto the harbour talking about the history on the way. On our return to school we will stopped off at St John’s Church and learnt about the history of the church with Reverend Tom Coopey.  It was a fantastic trip and a great hook to our topic. Back in the classroom, we have continued to explore the area we live in and in English wrote leaflets to persuade someone to come to Weymouth.

Lola said 'It was a great trip! I loved looking at the pictures from the past and asking lots of questions.'

Oscar said 'It was a long way to walk but I learnt lots! I enjoyed finding out about the History. Steve new lots of interesting things.'

Phoebe said 'I loved being out of school and exploring Weymouth. It was great that we could see the White Horse and Steve told us lots of interesting facts and stories.'

The children were a credit to St John's School and made Miss Stuart very proud. A big thank you to Steve and Reverend Tom for making the trip such a success!

Last week, the children used place value counters to explore multiplication. The children enjoyed working with a partner to explain their learning. We explored making a number 10 times bigger and using the grid method to solve multiplication number sentences.

During Autumn 1, in English Year 3 have been looking at the text The Iron Man by Ted Hughes. We have used role play to act out parts of the story and considered what the characters would say, how they are feeling and what they would do next. We have been looking at the vocabulary the author used to create a picture in the readers mind and created word banks of powerful adjectives to describe the Iron Man. We also burgled similes from the text and wrote our own to engage the reader and give more information.

Chase- His mouth was as wide as a tunnel.
Yasmin- His head was as big as a bus.
Tabby- His eyes were as red as a furnace.
Lara- He was as tall as a cliff.
Ethan- His eyes burned like fire.

What happened to the Iron Man?

The children have been reading the text The Iron Man during class reading. The children were excited to find all the Iron Man's body parts in the playground and put him back together. The children took on the role of The Iron Man and answered questions. They were encouraged to use the text to support their answers.

The children have wowed this week with their writing of instructions 'How to catch an Iron Man.' The children considered the audience and purpose when they were writing. They included fronted adverbials, adverbs and conjunctions to give the reader more information. The children showed a great attitude to their learning and should be proud of their work.

These instructions have been sent home- Enjoy sharing these and celebrating the learning.

The children had a great afternoon designing, making and experimenting with spinners. They made predictions about which surface the spinner would spin best on. The children learnt inertia is the force that keeps an object at rest or keeps it moving unless something interferes with it, such as the opposing force of friction.

While experimenting they asked questions and found answers to the following:

Which surface does your spinner spin the best on?

Which surface does your spinner not spin on?

Should the end of the shaft be sharp or blunt?

Which force keeps the spinner spinning?

What force causes the spinner to slow down and stop?

The children designed and made their own carts using a cardboard box, dowelling and wooden wheels. The children put their carts to the test and experimented which surface the cart moved the furthest on in their Science lesson. After the experiment, they evaluated the carts and thought about what they could improve- some children said attach their wheels in a different way as they fell off during the experiment!

Year 3 had a fantastic Greek day as their WOW starter for their topic ‘Gods and Mortals.’ The children came to school dressed as a character from Ancient Greece and they all put in lots of effort into their costumes!

The children started the day learning some authentic Greek dance moves and put them together into a short routine. They all worked really well together and showed great determination to learn the dance. They did a great job and the parents and adults enjoyed watching their performance! 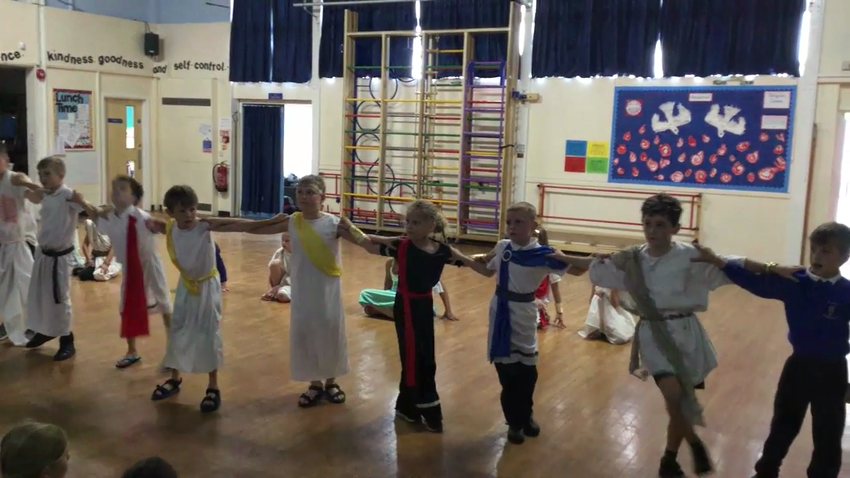 We looked at the Greek Alphabet and the children wrote their names using it. Did you know the Greek alphabet only has 24 letters? Children were able to use a copy of the Greek alphabet to write their full name using black paint. They enjoyed the challenge of finding the right upper or lowercase letters and copying them onto their strip of card.

The children have been interested to find out about different Gods and Goddesses. We started this session finding out what we already knew and it was great to hear the facts they had already found out from their home learning. In class, using ICT and books the children researched the Gods and Goddesses- Zeus, Demeter, Hades, Poseidon. They all created fantastic fact fans which they enjoyed sharing with their parents.

The children all tried Greek foods- pita bread, olives, feta cheese, holloumi cheese, hummous, tzatziki, pitta bread, moussaka and Greek yogurt with honey. They were also able to experience a real Ancient Greek favourite – grape squashing! Children took their shoes off and squashed down some grapes with their feet.

At the end of the day, the parents came in to celebrate the children’s learning. The children made them a wreath to wear, taught them the Greek alphabet and they enjoyed the Greek foods and even some parents got involved with squashing the grapes! All the children had a fantastic day and learnt lots of new facts and are looking forward to using this learning over our topic this half term!

Callum said ' I love Science! I wish everyday could be a Science Day!'

Jacob explained, 'An opaque object blocks the light and that is why shadows are formed.'

The children have enjoyed their Gymnastic sessions with Ms Stone this half term. They have learnt about different balances and how to move around the room. The children created their own sequences which included the balances they had learnt and presented them to the class.

Year 3 had a great world book day. They enjoyed looking at a range of books and sharing these with the Reception class. The children created book covers, wrote book reviews and created their own book marks. The costumes were all fantastic!

We have been exploring the text 'The Pebble in my Pocket.' The children used drama to bring the story to life and were able to retell the journey of the pebble. During the rest of the term, we will be looking at explanation texts, discussing the features and writing reports about volcanoes.

The children have done really well with our fraction topic in Maths. They have discussed the numerator and denominator and used manipulatives to add and subtraction fractions.

Layers of the Earth

During our Art and Topic lesson, the children have explored the layers of the earth. They used resources to show the areas of the earth. They now know, the Earth is made of four layers. The top layer, which is what we stand on is the crust, next comes the mantle and finally the core. Some of these layers are made up of even more layers and they’re always on the move. The children have enjoyed our topic Tremors and should be proud of their learning!

The children have enjoyed exploring and burgling vocabulary from the book 'Pebble in my Pocket.' During the topic, the children learnt a text about Earthquakes and performed this fantastically to their adults at their parents celebrating. The children burgled vocabulary and used this to write free verse poems and diary entries.

‘Growing and learning together, Sharing the love of God’